A flick through the writing book of my 10-year old renders me slate-faced for the duration of parents’ evening. His ‘penmanship’ – though it takes gall to call it that – is so appalling, it feels like a bad joke. His teacher mentions it warily; he’s already had ‘help’, to no avail. Meanwhile, I’m aware that my 14-year old’s handwriting is spidery and exhausting to read – one teacher insists he types his homework, which does not bode well for his GCSEs next year.

It’s not a traditional entry atop the list of subjects most fretted over by parents, but it’s an increasing concern: Henry Fagg of The Tutor Pages says last year enquiries about handwriting tutors rose by 20 per cent. The situation is dire, says handwriting expert Sue Smits of Morrells Handwriting, because most teachers graduate without proper instruction in how to teach it. There’s no national standard.

“Due to lack of training and time, teachers have no idea how to correct illegible handwriting, or of the pre-writing skills required to hold and steer the pencil across the paper,” she says.

To meet government requirements, “some schools start joined up handwriting in Reception,” says Sue, “missing the important development skill of letter formation”; it is this, she believes, that leaves children writing indecipherably as they get older. She has started a petition to Parliament to ban the “crazy” testing of joined up handwriting in primary school SATS.

Not only do most children age lack the muscle strength to grip the pen at that age, “they’re still learning letter shapes,” and hard-pressed teachers often lack the time and knowledge to help them.

Consequently, these pupils never learn to write properly, and Sue cites “an epidemic of illegible handwriting in our secondary schools,” to which my eldest is contributing. My youngest Caspar, too, continues to flounder. I send Sue a sample of his writing: she immediately spots multiple problems including “poor letter formation and poor joining technique.”

She also believes “he’s not using his wrist and fingers effectively when he writes. I would also question a poor core strength – [which] gives him stability when he writes.” She recommends “climbing, biking – squeezing the brakes – badminton and baking – making bread or pastry” to strengthen his finger muscles.

Her advice sends me into a panic: I live in London – a long way from Worcester, where she is based. Happily, fairy godmothers wielding pens instead of wands exist in the capital, and after a frantic online search, I track down handwriting specialist Lee Dein. The state of children’s handwriting is “a national disaster,” she laments. “Parents are desperate.”

That said, Lee loves errant script: “The worse it is, the more excited I get!”. This is because she can fix it. Six years ago, the speech and language therapist was asked to improve a child’s handwriting and subsequently devised a teaching method that transforms the most illegible scrawl into a neat, fluent, cursive script. Her success rate is “100 per cent”.

I book Caspar and Oscar an emergency session at Lee’s home. On completion of her 30-step Magic Link programme (also available as an online course) she tells my pair of scribblers, “your handwriting will look like that”, indicating a sample of immaculate font. All the tall letters touch the top line, and – her special ingredient – there is a small link between some of the letters to “stop them smashing into each other.”

All three of us are mesmerised by the before and after handwriting samples from pupils ranging from five-year-olds to adults displayed on her study walls. “It’s a recipe everyone follows,” she says. “There’s no variation.” 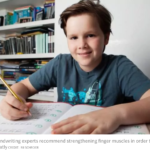 Two little boys are already diligently working from Magic Link textbooks. Lee sits Oscar and Caspar at a desk, and after dictating a few sentences, asks them to copy out the tall letters (t, l, h, b, k, d) from her textbook. They both exhibit common problems, including poor pen grip. Lee demonstrates the ‘frogs legs’ method of holding a pencil: index finger and thumb are bent, and don’t touch.

Within minutes, Caspar is complaining that his thumb aches. “It’s a good ache!” pipes up the small boy beside him.

Lee typically transforms a child’s handwriting within ten lessons, with the majority of her clients being boys. The Mumsnet consensus is that she works miracles: one mother says, following the course, her son is a “much happier child.”  It makes sense: if writing is laborious and difficult, there’s resistance.

My sons quickly gain confidence. Indeed, after just two sessions, the improvement in their penmanship is startling. Inspired by their speedy progress, I oversee Lee’s homework with an eagle eye: “Your ‘o’ can’t be floating in the air,” I tell Caspar, “keep it on the line!”

I proudly show the page of Caspar’s emergent handwriting to his father. It’s so neat and clear, my husband is incredulous. He splutters, “Anything in life is possible!” Or rather, he adds, “It’s possible with the correct teaching, and good practise.”